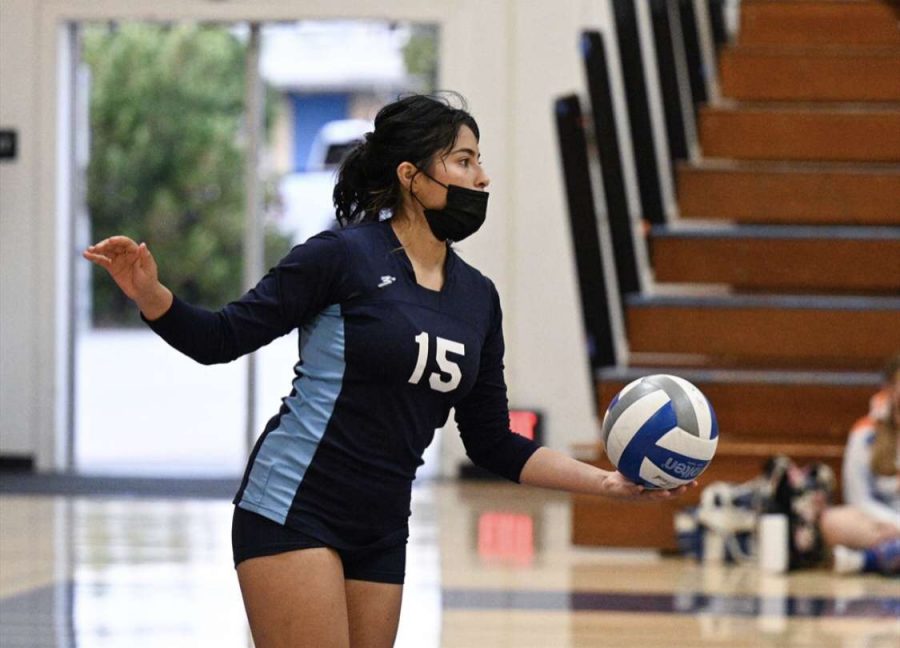 Senior Alexa Orozco sets up for a serve against Clairemont High in UC's 3-0 win on September 7.

The UC High Girls Volleyball Team is looking to continue their success this season as they look to defend their League Championship and repeat as Eastern League Champions.

Last season, the Cents won the Eastern League Championship on the back of some great senior leadership. With last year’s seniors now gone, an opportunity has sprung up for new leaders to step up and mentor younger players while hopefully culminating in another League Championship (maxpreps.com).

Senior Captain Keira Martin stated that she embraced the opportunity to be a leader on the team. “I’m looking forward to helping out the younger girls this season. We have two sophomores that are playing, and we are all very supportive of them,” she said.

UC Head Volleyball Coach Aaron Hartin echoed Martin’s sentiment, stating the team had great leadership from players who also perform at a high level.  “A strength of our team is our senior leadership and team chemistry,” said Hartin. “This team has a lot of fun together.”

Even with all the fun they have, the Cents know that as last year’s champions, everyone has their eyes on trying to take them down, and they must improve to stay on top. “We have a well balanced team in every area of the floor. We can do it all, which is something that I think allows us to succeed,” said Senior Captain Erika Johnson.

Hartin didn’t mix words when he talked about the team’s goal of winning the League again this year, “I think we have the ability to win a League Championship more convincingly than last year’s team with seven or eight wins in League if we can put it all together,” he said.

No team is without areas to improve and goals for the year, and Johnson said she will be looking for the team to improve their communication this season. “We can’t give up simple points because of a lack of communication,” she said. “Our team is pretty quiet compared to other teams which is something we must work on. As long as we can take care of that, we should be able to take the League title again this year.”

Martin believes that the team plays at its best when it is engaged and energized. “We need to keep our energy up over a full game,” she said. “We have strong girls playing and when the whole team’s energy is up it elevates our playing.”

The team fosters much energy from their dedication to team spirit. “Our whole team is required to participate in school spirit days and we also have our own themed spirit days when we have a home game,” said Martin.

Hartin also explained something unique to the Volleyball Team at UC High. “I give Blow Pops every week to players who have done exceptional things on or off the court. It is really something that we look forward to as a group,” he said.