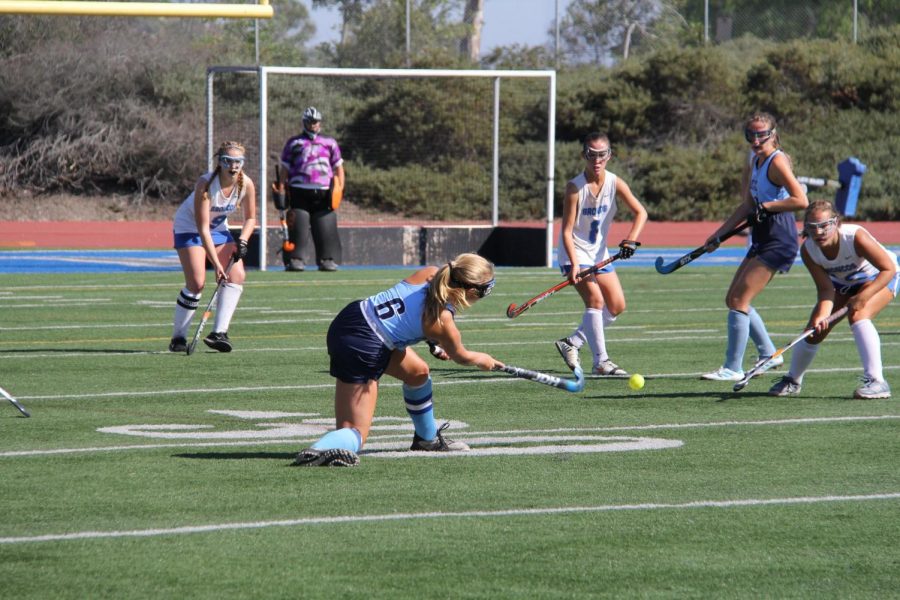 Midfielder Senior Olivia Upham makes a pass to Midfielder Junior Angela Cook in a pre-League game against Rancho Bernardo High in the 2019-2020 season.

As four-year League Champions, the UC High Field Hockey Team looks to continue their momentum from last season to take on challenges from stiff competition and changes due to COVID-19.

According to a high school sports statistics website, the team took first in Eastern League, claiming the title of Eastern League Champions, all while not giving up a single goal in all League games combined. The team finished the 2019-2020 season with an overall record of 11-11-1 (maxpreps.com).

Head Coach Amber Zimmermann stated, “I still believe we should have been CIF Champions, and I think our shortfall last year was not playing at our highest level each and every game. My goal this year is to challenge the players to go into each game as if it’s the last and play with beautiful intensity.”

High school sports will face great changes due to the pandemic this year, and field hockey is not an exception. Zimmermann explained what the season will look like come December. “Due to COVID-19 precautions, we will have to maintain 6 feet apart in practices, which limits defensive drills and game-like play. I hope that once the season begins, we will be able to find a safe balance to play with defense and maintain all players’ health,” she stated.

Midfielder Senior Olivia Upham said, “I know that a lot of girls have really pushed themselves and grown, so COVID-19 has really shined a light on everyone’s intrinsic motivation.”

Forward Senior Taylor Sullivan agreed that many returning athletes have grown over the off season, and is excited to see “…some beautiful reverse hits, air dribbles and spins.” She continued, “I think that utilizing more of these skills during games will definitely make an impact.”

For preseason, the Lady Cents are scheduled to play against a number of Division 1 teams, such as Patrick Henry High, Canyon Crest Academy, and The Bishop’s School. These faces will be familiar to the UC High Field Hockey Team, as they competed against these opponents last season as well (maxpreps.com).

The captains agreed that strong, connected passes as well as communication on the field will be key to the team’s success. Furthermore, Sullivan affirmed, “We can really improve upon coming out strong when the game first starts, like scoring a goal within the first ten minutes.”

Midfielder Junior Angela Cook stated, “I think our offense will be able to score more goals and have aggressive, organized attacks that will be even better than last year.”

With the loss of only one senior from the previous season, the team dynamic is expected to remain similar. Zimmermann stated, “I think one of our greatest strengths is the connections and bonds that our players have created over the years. You can’t teach these types of connections. They can anticipate what their teammates will do and prepare to play off each others’ strengths.”

Defender Senior Emma Podhorsky agreed that this positive attitude will be an advantage for the team as they face strong opponents. Cook added that the overall positive environment and the strong team chemistry have benefited the team’s performance in general.

COVID-19 guidelines are not the only big change to the season, Zimmermann explained. “[This year,] players will no longer be required to wear goggles. At least the players will have full vision this season and may just have to adapt to wearing a mask — if that’s what’s decided,” she said.