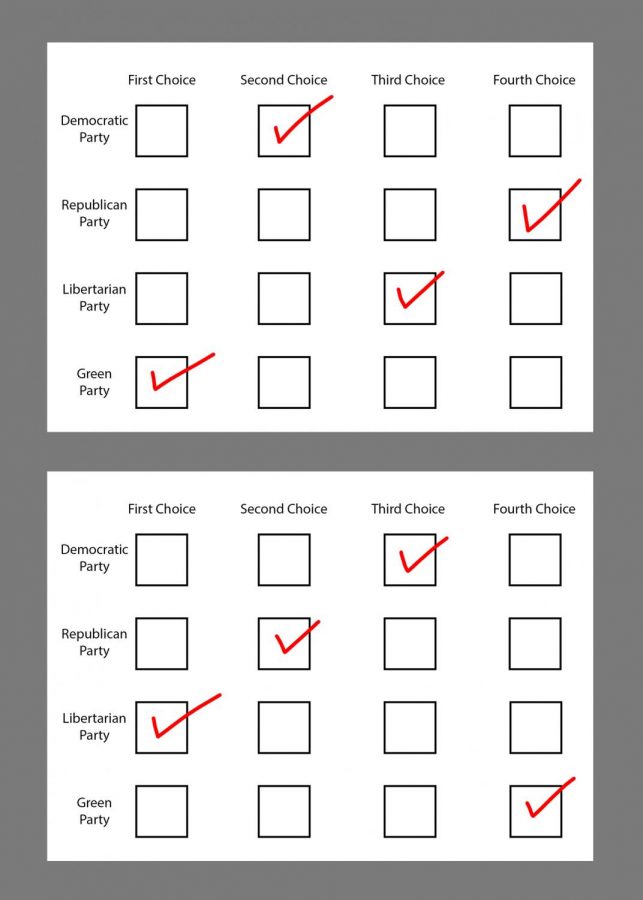 An issue that has become more and more contentious approaching the election is the United States electoral system, and the unfortunate truth that a third-party vote has no significant voice in large elections. The electoral college system benefits only the Democrats and the Republicans, and rarely focuses on independent parties.

A solution to this issue is a ranked-choice voting system, which would restore faith in the voting system and give power to more silenced voices in the country. According to FairVote, a nonpartisan group in favor of electoral reform, this system allows voters to rank their preferable candidates from most favorable to least favorable, and if a voter’s first choice is not viable, then their second choice is counted instead. For example, if a left-leaning person prefers to vote Green over Democrat, or a right-leaning person prefers to vote Libertarian over Republican, that person could have that option and still vote blue or red as a backup choice (fairvote.org).

One of the most beneficial qualities of ranked-choice voting implementation is the idea that a third party vote does not go to waste and candidates of all positions gain representation. According to TIME Magazine, “Ranked-choice voting advocates argue that the plurality system doesn’t always reflect the true will of the people. It can lead to vote-splitting among candidates with similar positions, resulting in a candidate who is less popular overall being elected, experts say” (time.com). For example, in 2016, many blamed Candidate Hillary Clinton’s loss on the amount of left-leaning voters that opted to vote for Green Party Candidate Jill Stein. This is often referred to as “splitting the vote” or the “spoiler effect,” and that phenomena simply would not exist under a ranked-choice voting system, as Stein voters who did not want Trump to win could have chosen Clinton as their second choice.

The system is also very applicable and realistic. According to the Ranked Choice Voting Resource Center, Maine has been using a ranked-choice voting system since 2016 for presidential, congressional and statewide elections (rankedchoicevoting.org). AP Government Teacher Michele Fournier said, “I like the idea of ranked-choice voting. It gives third party voters more of a say in the outcome of the election. I’m not sure how we could implement it in California, but my guess is we would need to amend the state constitution to allow for it.”

Many point out that an election should be won by the person with the most votes, not an aggregate of complex rankings and eliminations. According to The Boston Globe, “Switching up the rules of a contest can be entertaining when playing poker, but election procedures should be simple and readily understood” (bostonglobe.com). The issue  is, especially given the current two-party corporate duopoly that dominates modern politics, third parties that deserve recognition will never be significantly supported. Every election will remain an endless cycle of voting for the “lesser of two evils,” as a third party vote will remain a “throwaway” until they are given the opportunities they so desperately need. So, although it may be more convenient to keep our current system, it would largely benefit the people to give power to more silenced voices.

The next steps toward implementing ranked-choice voting include furthering voter education, doing ranked-choice voting trials in smaller local elections, and testing out a variety of different voting models and encouraging citizens to give feedback and insight. Implementation of the system would not happen overnight; it would happen incrementally. Even then, people may be afraid to vote for third party candidates due to the continuous narrative that they should not be voted in. But, after the system is in place and solidified nationwide, the US will become miles more democratic.