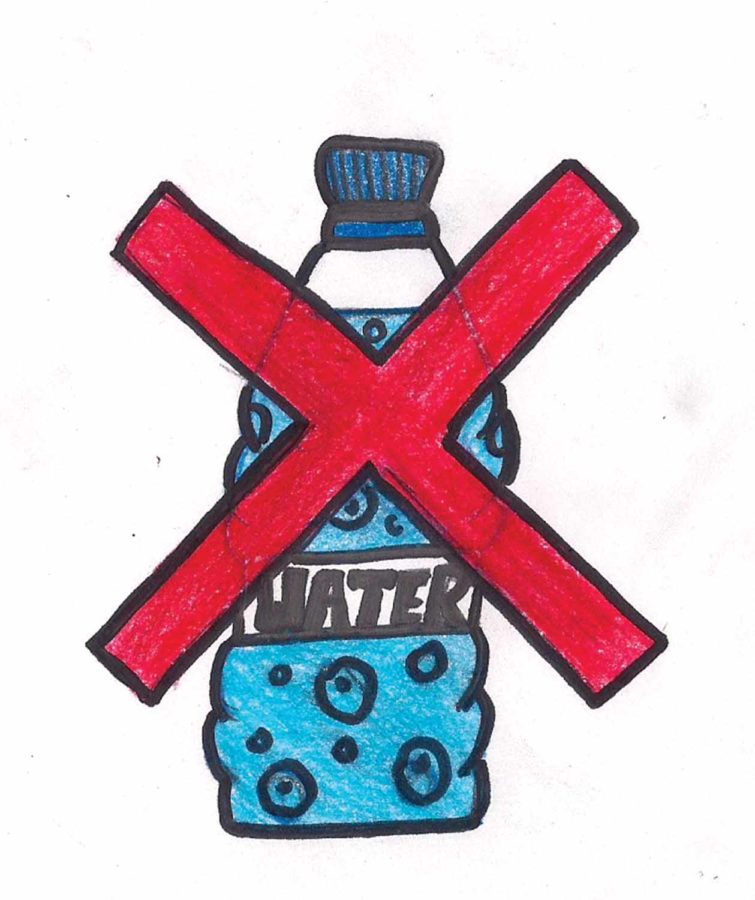 Imagine the seafood that people consume containing small bits of plastic. Plastic derived from the water bottles people buy, drink and toss away, ending up as litter, or sitting landfills or floating in streams, rivers and oceans. Doesn’t that sound appetizing?

Out of these billions of water bottles purchased, five to thirteen million end up in ocean waters, left to be consumed by birds and marine life. In fact, some experts believe that these toxic and dangerous plastics, after being consumed by fish, find their way into the human food chain when those fish are hunted for commercial consumption. The study concluded that people who eat seafood consume about 11,000 tiny plastics per year, which generates concern for the overall health of humans (theguardian.com).

These plastics contain toxins that, with time, can become harmful to humans. According to One Green Planet, plastic bottles contain a chemical called Bisphenol A, otherwise known as BPA, that can impact human health. As a chemical that creates a hardened and transparent plastic, it also creates problems with the human endocrine system, which controls hormones, development and metabolism. Potential issues that result from harm to the endocrine system are early puberty in girls, premature labor, birth defects, and certain cancers. A study conducted in 2011 stated that in the United States, 96 percent of women have BPA in their systems. Luckily, doctors can now test how much of this dangerous chemical is in a person’s system, and provide ways to lower its percentage (onegreenplanet.org).

Another chemical known to be harmful to humans is phthalate, which also induces hormonal and metabolic side effects. This chemical is put into plastic bottles in order to make the bottles more flexible. Unfortunately, it can have terrible side effects for males, causing some reproductive system defects. These chemicals aren’t removed from plastic bottles because the percentage of the chemical being used in the water bottle is low, and therefore, it supposedly doesn’t have any health-related effect on humans. But this assumes that people are not consuming huge amounts of water from plastic water bottles. What about people who are literally drinking out of plastic water bottles all day every day? Companies that sell their products inside plastic bottles use phthalate because its concentration increases the time a plastic bottle can be stored, but exposure to heat causes accelerated leaching of harmful plastic chemicals into that drink (onegreenplanet.org). This is a serious concern.

Though these chemicals may be very harmful to human health and development, the creation of bottled water also takes a toll on the agricultural industry. Water bottle manufacturing facilities use a large amount of water to create the bottles, which steals from the water needed to produce food and crops for farmers. When the farmers have a decreased amount of water to grow their crops, they can’t produce as much food (onegreenplanet.org).

Junior Grace Kinshofer strives to recycle as many plastics and other recyclable materials as possible and doesn’t believe that people should use plastic bottles. “Society should try to eliminate plastic water bottle use altogether, because not everything that gets recycled ends up where it needs to be,” Kinshofer stated. She believes that by owning a reusable water bottle, the issue revolving around plastic bottles can be lowered, and therefore, fewer plastics will be exposed to the environment.

According to One Green Planet, while plastic bottles can be recycled, those that aren’t just end up as litter on streets and in landfills. These landfills create problems such as land pollution, where chemicals from the water bottles leak into the ground, where we draw water from, further affecting human health. The pollution from these littered water bottles contaminate the soil and become harmful to plant life as well (onegreenplanet.org).

There isn’t anything positive that comes out of water bottle consumption. Though it may seem like a quick and convenient way to stay hydrated, water bottles do more harm than good. They pollute the land and sea with chemicals, harm animals that accidentally consume them, and cause many side effects that stunt growth and lower the overall health of the human reproductive syste